Home » Insights » Allergan v Self Care IP Holdings: PROTOX – Not such an alternative

Allergan v Self Care IP Holdings: PROTOX – Not such an alternative

The recent decision of Allergan Australia Pty Ltd v Self Care IP Holdings Pty Ltd [2021] FCAFC 163 is a prime reminder that even promoting a product as an alternative to a competitor can result in trade mark infringement.

The Full Court found that the use of PROTOX and “instant Botox® alternative” by the Respondent were deceptively similar to the Appellant’s trade mark BOTOX, and that the product claim of “clinically proven to prolong the effect of Botox®” was misleading or deceptive to consumers.

BOTOX and the Self-Styled “Alternative” PROTOX

This decision concerned the famous anti-ageing product “Botox.” The manufacturer of Botox, Allergan, is also the owner of various trade marks for BOTOX, including the defensive word mark BOTOX for class 3 “…anti-ageing creams; anti-wrinkle cream.”

The PROTOX packaging stated that the product was “clinically proven to prolong the effect of Botox®” and “instant Botox® alternative”: 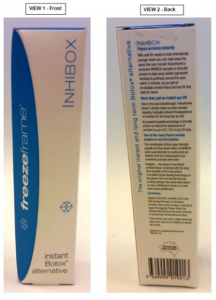 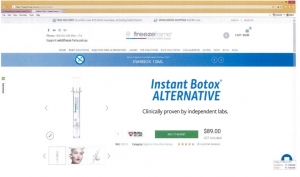 At trial, Justice Stewart held that BOTOX’s reputation prevented a finding of deceptive similarity under section 120 of the Act – such was BOTOX’s fame and popularity, it was unlikely that consumers would be confused by PROTOX, or its use of BOTOX on those products, advertising and packaging.

Given these findings, Allergan appealed to the Full Court.

Allergan claimed that Self Care, in using PROTOX as a trade mark, infringed BOTOX under section 120(1) of the Act.

To determine whether section 120(1) of the Act states that:

To determine deceptive similarity, a trade mark is taken to be deceptively similar to another trade mark if it so nearly resembles that other trade mark that it is likely to deceive or cause confusion.[1] The threshold for this test is whether an ordinary person, with an imperfect recollection of the two trade marks, would be caused to wonder about that the products in respect of one trade mark come from the same source as products the subject of the trade mark said to be infringed.[2]

However, the provisions of section 120(1) of the Act are not directed towards confusion between the trade marks or products themselves, but rather the source of the products.

Self Care reiterated the “too famous a trade mark for confusion” argument, however the Full Court did not accept it:

As a result, the Full Court held that PROTOX was deceptively similar to BOTOX for the purposes of section 120(1) and 10 of the Act.

Justice Stewart at first instance held that the word “instant” and “alternative” were descriptive in nature and emphasised that PROTOX was not a BOTOX product and simply an alternative.  As such, the phrase “instant Botox® alternative” did not constitute trade mark infringement. The Full Court did not accept this argument:

As a result, Self Care was held to have infringed the BOTOX trade mark pursuant to section 120 of the Act.

Comparative advertising has been defined by the Court as meaning “advertising which promotes goods or services by comparing them, to their advantage, with the goods or services of a competitor.”[7]  Businesses utilise comparative advertising as a marketing strategy to advertise a product positively in comparison to a competitor’s product. The overall aim is to ensure that the advertised product is presented as superior and distinctly different to the competitor’s product.

Self Care argued that it had a defence of “comparative advertising” pursuant to section 122 of the Act.

“in spite of section 120, a person does not infringe a registered trade mark when: …the person uses the trade mark for the purposes of comparative advertising.”

It was apparent that Self Care was intending to leverage off the significant reputation and goodwill of BOTOX, rather than advertise its products comparatively with BOTOX.

The Court rejected that Self Care could rely on this defence. Self Care had used the phrase “instant Botox® alternative” as a trade mark and was not used in good faith for comparative purposes.

Allergan alleged that the use of “instant Botox® alternative” and “clinically proven to prolong the effect of Botox®” was misleading or deceptive under section 18 of the ACL as it conveyed that Self Care products would achieve:

The Full Court considered “reasonable members” of the brand’s target market to help define how “instant Botox® alternative” and “clinically proven to prolong…” was interpreted in the everyday market. A “reasonable member” of the target market was referred to as an individual that does not have extensive knowledge about cosmetic products. The Full Court agreed with the above – a reasonable consumer would have understood the phrase “instant Botox® alternative” to have lasted as long as Botox, or at least prolong its effects.[9] Evidence submitted to the Court indicated that the Self Care products would only last for a period of 28-days from application;[10] a lot shorter than 4-months.

It is important that businesses critically evaluate their competitors’ products and associated trademarks before applying comparative advertising. This will ensure that there is a distinct comparative element to their strategy and not a similarity.

Businesses should also consider how their marketing strategy will be interpreted by the reasonable consumer so as to mitigate unintended leveraging of another brand’s reputation. In the situation of Allergan, the average reasonable consumer was noted to only have an introductory knowledge about cosmetic products and would likely be unaware of the different origins of PROTOX and BOTOX, given their similarity.