APRA announced in their Senate Select Committee on Financial Technology and Regulatory Technology Submission that they ‘potentially’ could be overseeing Facebook’s Libra coin which can be spent through Facebook’s digital wallet, Calibra. Partner, Michael Bacina, and lawyer, Tom Skevington goes into further detail about this significant proposal.

The Australian Prudential Regulation Authority (APRA) has published its submission to the Senate Select Committee on Financial Technology and Regulatory Technology, which includes a proposal for a new regulatory framework for providers of digital wallets, including Facebook’s Calibra proposal.

APRA’s submission summarises the current regulatory framework for digital wallets, which is split between the Reserve Bank of Australia (RBA), ASIC and APRA. The RBA is responsible for the overarching framework set out in the Payments System (Regulation) Act 1998 (Cth). ASIC is responsible for regulating digital payments services that are financial products such as non-cash payments facilities, primarily through the Corporations Act 2001 (Cth).

APRA’s current role is to licence and supervise larger providers of widely used facilities that hold stored value under the Purchased Payments Facilities (PPF) framework, as these are functionally akin to bank accounts (but are not protected accounts under the Financial Claims Scheme). Currently however, the PPF framework has limited application, with Paypal being the only PPF provider currently registered with APRA.

Through the Council of Financial Regulators (CFR), which includes the RBA, APRA, ASIC and the Treasury, APRA has co-developed a new regulatory framework intended to be better suited to accommodate future developments and technological advances, specifically including proposals for “global stable coin eco-systems that have been the subject of significant attention in recent months” (read: Libra). The Federal Government is currently considering a paper prepared by the CFR following the Review of Retail

Payments Regulation: Stored-value Facilities, which broadly provides that APRA’s role wil expand to oversee digital wallets that are widely used as a means of payment and store significant value for a reasonable amount of time. APRA notes that this expanded definition ought to include Facebook’s Calibra proposal, but will probably not include digital wallets primarily used to pass payments through, like Apple Pay.

APRA provides a broad overview of the proposed framework in the diagram below: 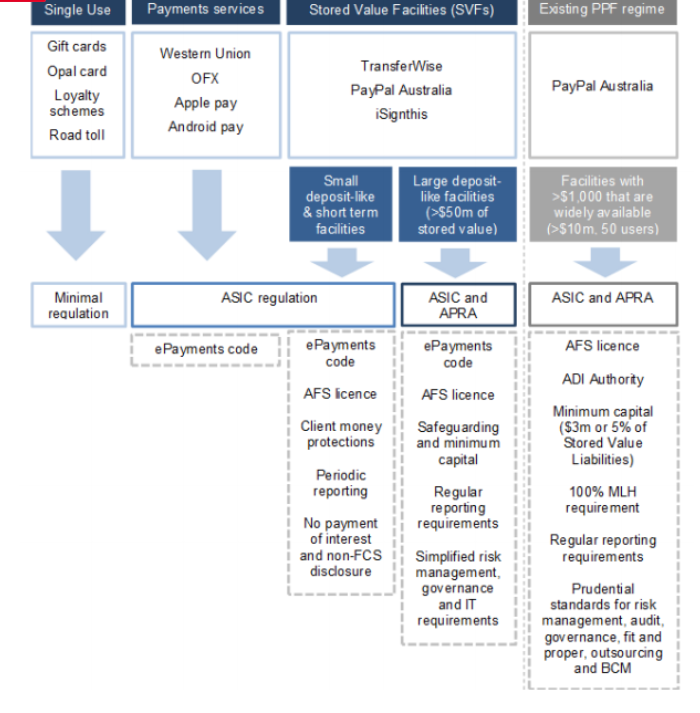 APRA also recently published its policy and supervision priorities for 2020, and indicated that it expects to review its approach to regulating PPFs and consult on a revised prudential standard in the second half of 2020.

Currently, an application to become a purchased payment facility (PPF) provider comes with an AUD$55,000 licence fee, and while fees have not been considered for the proposed framework, a similar fee is likely to apply.

Interestingly, the submission also includes a further acknowledgement that as part of APRA’s work with the CFR, it is part of a “Distributed Ledger Technology Working Group” (which also includes AUSTRAC), aimed at ensuring a consistent regulatory approach to the supervision and regulation of blockchain technology in finance. Unsurprisingly, APRA reaffirms that the group has been closely examining the Libra proposals, as well as other global stablecoin proposals.