The New South Wales Government has finalised the draft declaration of the New England Renewable Energy Zone (Draft Declaration) and it is now on public exhibition for feedback until 12 November.  The Draft Declaration is the first step in formalising the New England Renewable Energy Zone under s19 of the Electricity Infrastructure Investment Act 2020 (NSW) (the Act).

The Renewable Energy Zone (REZ) strategy is part of the NSW Government’s Electricity Infrastructure Roadmap. The aim is to encourage a cluster of renewable generators in an area, and in doing so, to capitalise on economies of scale for the development of network infrastructure. ‘Long-Term Energy Service Agreements’ (LTES Agreements) will encourage investment by giving long term revenue certainty and minimum pricing through derivative arrangements.

The indicative location of the New England REZ was first published in 2018 and since then, there has been high levels of real property transaction activity in the area. Energy Corporation (Energy Co NSW) has now refined the area after an extensive collaboration and consultation process. Once gazetted, the specified geographical area and the specified network infrastructure will comprise the New England REZ, although infrastructure may be added to the declaration at a later date.

The Draft Declaration declares (in draft form) a REZ comprising:

Schedule 1 to the Draft Declaration is a map identifying the New England REZ Geographical Area – extracted below. 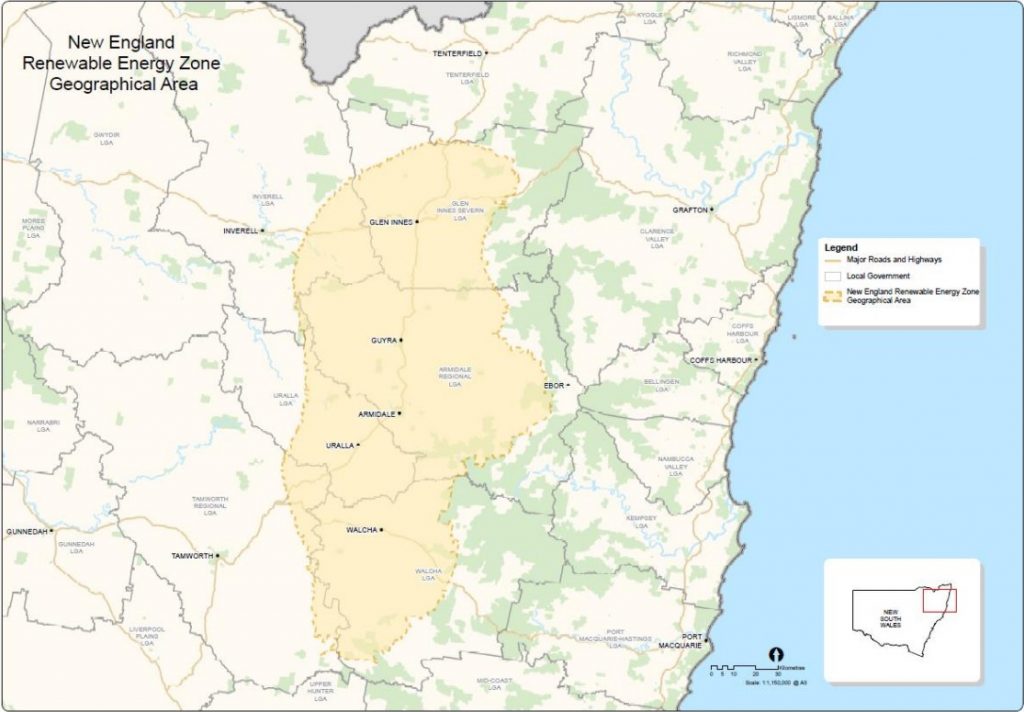 Next steps under the Act

Once the declaration is gazetted, the next steps under the Act include the following.

Generation infrastructure in the REZ is preferenced through s48 – the Consumer Trustee must not recommend entry into an LTES that is outside the REZ unless it shows ‘outstanding merit’.

The order cannot be made once a project proponent has development consent.

EnergyCo NSW is also developing guidelines about when it can issue this order.

The draft declaration is open for public feedback to EnergyCo NSW’s REZ team until 12 November 2021. Further information is available here.

Formalising the New England REZ will be a welcome step for the many project proponents that are already active in the area as well as landholders entering into contracts for sale of land, leases and options for sales and leases with them.

The objects of the Act include a wide range of economic, environmental, social and energy security goals and these objects are given practical effect through measures such as the LTES tendering and negotiation process. Careful implementation will be needed to ensure local Aboriginal communities and others in the community do share in the benefits that the REZ promises. The REZ strategy is shaping up to be an important driver of carbon emissions reductions, regional investment and economic transition in New South Wales.